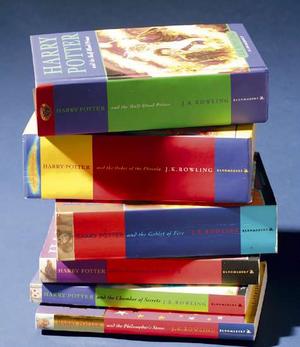 When I think of Harry Potter, the first thing that comes to my mind is – Thank God J.K Rowling had this amazing idea. She gave my childhood a gamut of memories and emotions. There are many many who hate Harry Potter series. I can surely say – either they have not read any of it or seen the stories just through the movies.

Because, anyone who has read them will always know – that the literally BEST SELLING FICTION series has absolutely nothing to do with magic. Magic in Harry Potter is like that beautiful background music in a play. You realize its absence only when it stops. Just, when it comes to HP, the magic never stops! When not weaving magic through the wand waving, Rowling weaves magic through the beautiful emotions she has so aptly portrayed in the series.

Rowling mesmerizes me even today after all these years. I remember  being lost in Harry’s world, being at Hogwarts, having superb friends, being intelligent like Hermione, being brave like Harry, being the superb friend like Ron, being perfect like Dumbledore. The lessons that I have with me; all find their root in the 7 books! It is like the 7 books have 7 super amazing life lessons for me. Though the magic she used is so perfect and complete in every sense, what I learned from her was –

And you thought Harry Potter was all about magic! It makes my belief even stronger – never judge a book by its movie or cover. True it is fantasy fiction. But it taught me more about life than any other thing could ever do.

There were / are people who did not like the way the book ended. Looking out for some important deaths were you? I am perfectly happy with the way Rowling ended it. Because, she has left so many loose ends. Many places the book could start again. And I would be the same enthusiastic reader that I was 11 years ago. And I would love nothing more than a book on Snape’s story. It would a worthy read.

Harry Potter is one story among many that grips children even today; 11 years after it took the reader’s world by storm, it still amazes me like never before. I still find different angles, I still cry if I read an emotional part, I still wonder what would it be like if there did it exist a world like this. But wait ! Who says it doesn’t? In the hearts of all those millions who have loved Harry, he still lives. His world exists, teaching a new lesson everyday. Even if Rowling would have killed Harry, he would have lived on; a fiction character that taught many a children the real life. Inspired to live life as Rowling rightly puts it –

The last enemy that shall be destroyed is death

Thank you Joanne Kathleen Rowling for giving me a better childhood 🙂 .